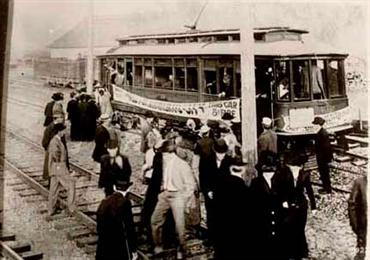 Over four thousand years ago, the Patwin Indians were the first inhabitants of the area now known as the City of West Sacramento. These Native Americans established villages on the west bank of the Sacramento River and their members often numbered in the hundreds. The Patwin Indians took advantage of the abundant natural resources offered by the land and water that surrounded them. They hunted and fished; they also crafted baskets, fishing nets, boats, and rafts from willows, tough grasses, and vines. All of their needs were provided by their environment.

The tranquil lifestyle of the Patwin Indians changed dramatically with the introduction of European settlers during the 19th century. Many hunters and trappers were attracted to the Sacramento Valley by the abundance of fur-bearing animals. Tragically, with the arrival of these European explorers came diseases which decimated the Patwin Indian population. Malaria and smallpox epidemics swept throughout the Patwins and other surrounding Native American villages in 1833 and 1837. By the time the epidemics had been contained, the Native American population in the Sacramento Valley had dropped from 60,000 to 20,000 people. Over time, more and more settlers came to the valley. The few remaining Patwin Indians either became employed or enslaved by the Euro American settlers, thus bringing to a close the Patwin cultural lifestyle.

In 1844, Jan Lows de Swart, a Flemish traveler, was the first Euro-American to permanently settle in the area of West Sacramento. Jan, who came to be known as John Schwartz, built a shack along the west bank of the Sacramento River six miles south of the confluence with the American River. In 1845, Schwartz acquired a land grant from the Mexican Governor Manuel for an area of land one mile wide and twenty miles long. He named his newly acquired property Rancho Nueva Flandria after his native homeland. Shortly after settling here, John, with the help of his brother George, established a salmon fishery along the river. Besides drying and pickling the salmon, they also engaged in raising livestock and cultivating potatoes and melons. Little did John and his brother realize that within a few years, the great gold rush of 1848 would begin in California. The announcement of the discovery of gold at Sutter's Mill brought thousands of miners to the area.

In 1846, an adventuresome jack-of-all-trades named James McDowell bought 600 acres of Rancho Nueva Flandria from John Schwartz. With his wife, Margaret, and their three daughters, McDowell settled in the area we know today as Broderick. The McDowell family was not untouched by the violence that often marked the tumultuous times of the Gold Rush. In May of 1849, James McDowell was shot and killed in a barroom brawl that he had supposedly instigated. With the loss of the sole supporter of the McDowell family, Margaret had to find the means to support herself and her children.

At first, Margaret McDowell took boarders into her home as a means of gaining some income, but she soon realized that this was not enough. It became apparent that the land she owned was her most valuable asset. In October of 1849, Margaret hired a land surveyor to map out 160 acres, which was subsequently divided into forty one blocks. She sold individual lots within this platted area which she named the Town of Washington. The first lot was sold to August W. Kaye for $500. During the ten years following its creation, the rural Town of Washington experienced a significant increase in business development and shipping activity. One of the earliest companies to be established in the town was the California Steam Navigation Company, which was attracted to the area in 1859 by the close proximity of the Sacramento River. Other economic enterprises that marked early Washington included hotels, saloons, and restaurants catering to the needs of weary travelers. Many travelers making the harsh journey through the marshlands on their way to Sacramento welcomed the rest stop at the Town of Washington.

Other enterprises that found success in the early days of West Sacramento were the fishing and farming industries. Fishermen saw the profitable potential in salmon, sturgeon, catfish, eel, crayfish, and clams. The river community was thriving, supplying fish markets not only in Sacramento, but in San Francisco as well. In addition, the rich soil of the valley produced abundant crops of com, melons, cucumbers, and sweet potatoes The dairy industry also established roots in West Sacramento around this time. One of the area's most well-known dairy farmers was Mike Bryte. Bryte came to California in 1849 to try his hand at gold mining. Although he did not make a fortune in gold, he bought a dairy farm in 1853 which was very successful. When the California Steam Navigation Company came to Washington, Bryte used the steamships to carry his dairy products to regional markets. Profits from this allowed Bryte to expand his holdings. By 1879, he owned 1,500 acres of land, raised 150 cows and 100 young stocks, and farmed 2,500 acres in Sacramento County. Mike Bryte's status in the community was marked by his election to the Yolo County Board of Supervisors and later as sheriff. During the 20th century, Mike Bryte's property was subdivided and became known as the community of Bryte.

With time, the area continued to grow, prosper, and develop. The Town of Washington was renamed Broderick in honor of U. S. Senator David D. Broderick. After 1900, the three communities known as Bryte, Broderick, and West Sacramento were cumulatively known as East Yolo. From 1900 to 1920, the population of East Yolo doubled from 1,398 to 2,638. These communities are the foundation on which the current City of West Sacramento is built. In June 1963, the Port of Sacramento was opened to deep sea traffic with the completion of the Deep Water Ship Channel. The project had been authorized by Congress in 1946 and construction commenced in 1949. Although the City continues to change and grow even today, its roots are deeply embedded in the community spirit of the past.

Roots of a New City