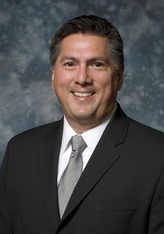 Chris Ledesma was first elected to the City Council in the fall of 2010. Previously, he had served on the City’s Planning Commission since 2001, including five terms as chair.

Through his leadership, Mr. Ledesma has worked to attract significant new employers such as IKEA, Target and Nugget Market. He was also instrumental in the City’s approval of the Bridge District plan, an urban commercial and residential zone near Raley Field that will create jobs and recreation opportunities for West Sacramento residents.

Mr. Ledesma has also been a leader in the effort to open more parks and recreation areas, such as the Clarksburg Trail System, the Deep Water Channel Access Area and the West Sacramento Recreation Center.

A vice president for Wells Fargo bank, Mr. Ledesma has made a career of helping small businesses succeed through developing financing programs with the Small Business Administration and advocating on behalf of small businesses. His father was a small business owner for many years in Sacramento.

As a member of the West Sacramento Chamber of Commerce, he developed the Small Business Response Team and pursued support from federal resources to help local small businesses deal with economic issues.

He received a Bachelor of Arts in Information Communications from California State University, Chico. He’s been a resident of West Sacramento since 1995.