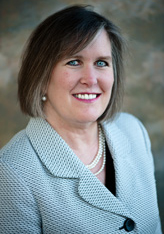 Beverly “Babs” Sandeen was appointed to the City Council on April 2, 2014, and elected on November 8, 2016. She previously served on the City’s Planning Commission since 2005, including a term as its chair.

She is a member of the Rotary Club of West Sacramento Centennial and a graduate of the FBI Citizen’s Academy. She has served on a number of boards of directors including the California Postsecondary Education Commission, the Los Rios Community College District Bond Oversight Committee, the American Leadership Forum’s Mountain Valley Chapter, the Girl Scout Council of Orange County, Align Capital Region, the Sacramento Valley Conservancy, the Woodland Opera House and has served as a trustee of the Alpha Chi Omega Foundation. She currently is an executive board member of the Metro Chamber of Commerce.

She chaired the Metro Chamber of Commerce’s Cap-to-Cap program in 2013 and served as honorary co-chair in 2017. Sandeen was recognized by the chamber as the 2013 Volunteer of the Year and was named one of the Sacramento Business Journal’s Women Who Mean Business in 2014. She received the West Sacramento Mayor’s Civic Leadership Award for Service in 2013.

Sandeen served at both the University of California Davis and University of California Irvine and at the Los Rios Community College District in leadership positions for advancement and alumni relations and was involved with the Council for the Advancement and Support of Education (CASE). Previously, she served as a member of the CASE Commission of Alumni Relations. She also worked as Executive Director of the Yolo Community Foundation.

She received her bachelor’s degree in political science and doctorate in social ecology from UC Irvine. She has been recognized with the Distinguished Alumna Award by the UCI Alumni Association.