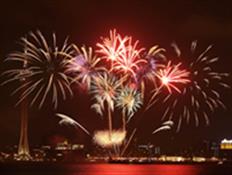 The City Council also adopted Resolution 11-5 which grants eight Fireworks Sales Permits to organizations meeting specific guidelines outlined in the West Sacramento Fireworks Ordinance. The permits are awarded by lottery, information on the lottery can be found below.

Use of State of California Approved Safe and Sane Fireworks

State of California Approved Safe and Sane Fireworks can be utilized within the City of West Sacramento during the period of 12 noon on the 28th of June through 12 noon on the 6th of July of the same calendar year.