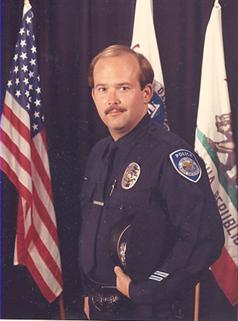 Officer James McKnight was shot while attempting to serve a search warrant on Friday, June 15, 1990 at a residence in the town of Madison, in rural Yolo County. Officer McKnight was a member of the Yolo County Narcotics Enforcement Team, who along with members from the state Bureau of Narcotics Enforcement had a warrant to search the house whose residents were suspected of involvement with a cocaine smuggling ring. As Officer McKnight and the other members of the enforcement team entered the residence, they found a bedroom with its door locked. Behind the door was a suspect who had barricade himself with a loaded gun. The suspect fired at the officers, striking Officer McKnight in the head and upper torso. Another officer, Special Agent Ken Beckstead was wounded in the wrist and chest. After a valiant effort by medical personnel to save his life, Officer McKnight passed away.

Officer McKnight had been with the West Sacramento Police Department since incorporation in 1987. He previously worked for the Yolo County Sheriff’s Department, the Woodland Police Department and a police department in Hawaii. Officer McKnight had just graduated from the McGeorge School of Law and hoped to use his law degree to expand his horizons. He was described by his fellow officers as dedicated and reliable and was well liked by everyone.

In 1996, the West Sacramento Police Department dedicated its new building in memory of Officer McKnight. 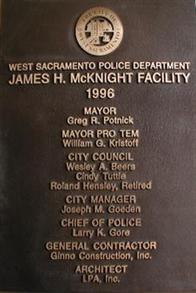